The trials of the toast – do’s and don’ts

I had the pleasure of connecting with Geoff Woliner at a recent wedding industry event. In addition to being Stand Up NY’s “Funniest Person in Queens,” Geoff is a talented speechwriter and presentation coach. Geoff sent me these humorous – and important – tips for our readers to pass along to their best men and maids of honor… A few years ago, I was asked to deliver the toast at my friend’s big, fat Greek wedding in New York. Despite being a stand-up comedian, my nerves still kicked in. There was a little voice whispering, “This HAS to be good. They HAVE to laugh. These are your BEST FRIENDS. If you mess this up, they’ll disown you!” So I said, “Thanks for the vote of confidence, Grandma.”

Months of preparation ensued, and before I knew it, it was show time. Rather than re-invent the wheel, I applied what I’d learned on stage to my speech. Be funny, direct, and brief. Always smile. Make good eye contact. Begin and end with your best jokes. (And never insult someone who just got out of prison.)

Countless weddings later, I’ve seen many different components that make a great toast. Here are some do’s and don’ts to help you and your wedding party get started.

The Roast: Do take a few potshots at those in the crowd with thick skin. If Uncle Larry frequently jokes about his bad back, so can you. If cousin Jamie has a piñata with her ex-husband’s face on it, he’s fair game. Everyone loves a roast, but only if directed at those who can take it. Don’t make any jokes that mock the bride. Ever. Repeat – NEVER make a joke at the bride’s expense. Gentle ribbing is fine, but no jokes about the bride’s dress, weight, or makeup.

Childhood Stories: Do talk about some misadventures you had with the bride/groom, but only ones the couple is comfortable sharing. Stories about how the bride fell off her bike repeatedly when she was 8 or how the groom’s tuba solo made the entire school assembly cringe are perfect. Don’t bring up an incident that your frat buddies found hilarious, but others would find horrifying. That’s best left within the confines of the bachelor party. And if the bride was known to go home with a different guy every weekend in college, it’s a safe bet she’d like to keep that information from Grandma.

Stand-up Routine: Do turn the speech into relevant, humorous storytelling. “When we entered middle school, Jimmy was the best player on our JV basketball team. A team that went 0-24. But he rallied the troops, and the next season, we came roaring back with a 1-23 campaign. Good job, Jimmy.” Don’t turn the speech into your own personal comedy showcase, talking about your own life and leaving out the reason you’re there in the first place. You’ll lose your audience quickly, and rightfully so.

Drinking: Do have one drink to settle your nerves if you’re an anxious speaker. It’ll take the edge off and allow you to focus. (And be sure that one drink isn’t a Long Island Iced Tea.) Don’t  have more than one drink – that’s asking, nay, begging for trouble. After a couple of drinks, you’ll get sloppy, forget your transitions, and stare blankly into the audience, completely forgetting what comes next. And four or more may incline you to say something that’ll get you slapped by the maid of honor before you even take the stage. Just. Say. No.

Working the Crowd: Do focus on the friendly faces in the crowd that’ll support you and laugh at even your worst jokes. Never turn your back to the audience. Incorporate some self-deprecating humor if a joke bombs. “Guess I won’t quit my day job, (looking at the bride & groom) but hey – they asked me to give this speech. Boo them!” Don’t start attacking the crowd if your jokes aren’t working. This works well in comedy clubs but is a disaster at weddings. Speech Length: Do make your speech funny, direct and BRIEF! Rehearse it several times until you find the magic formula that keeps it under 5 minutes. End with your best joke and leave them wanting more.  Don’t turn the toast into your own personal filibuster. Regardless of how good the speech may be, everyone has a limited attention span and will start anxiously grumbling for you to wrap it up if you go on and on. Also, don’t torture the crowd with “Ummm….uhhh….well….umm….” while you try to come up with new things to fill the time.

The wedding speech is one of the most important parts of the big day, because it’s timeless and memorable. When you’re re-watching your wedding video for the 112th time, you won’t be rewinding and fast-forwarding the Viennese table being rolled out or uncle Jim’s painfully uncoordinated version of the Electric Slide. (Well, OK, that’s pretty funny and you should re-watch it.) It’s the toasts and speeches that will stand out – those moments when those closest to you got a chance to speak from the heart in front of the people with whom you chose to share your special day.

Great advice, Geoff! If your wedding party would like a hand writing and delivering their own funny wedding speeches, contact Geoff@WinningWit.com.

Share
Previous It takes a team to pull off an event …
Next Want to win a free wedding venue? 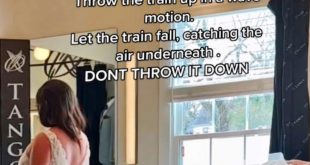 Wedding Tips from Tangs: How to Fluff a Train Simplified Soirees: Creating an elegant reception without a traditional dinner Unboxing with Cheryl Fischer of Arbonne