Anna and Scott met at the wedding of Anna’s high school friend and a lifelong buddy of Scott’s. He approached her at the bar and they hit it off right away. They talked and danced together for the rest of the night and have been together ever since. Scott proposed to Anna on a picturesque April afternoon in Chicago’s Lincoln Park. They were on their way home to Anna’s apartment when Scott suggested they take a detour through the park. The spring flowers were in bloom and as Scott held Anna’s hand he told her how much he loved her and everything she meant to him. Before she knew it he was down on one knee, asking her to be his wife. She answered with a resounding yes! As they began planning the wedding of their dreams they knew one thing was most important, that their day be personal and meaningful. They started by choosing the same church that Anna’s parents had gotten married in for their ceremony. The stunning Redemptorist Catholic Church in Kansas City.

Anna wanted a gown that felt feminine and romantic. She says that as soon as she tried on her Alexandra Grecco gown she knew “it was the one”. She looked gorgeous in the A-line stunner with its deep V neckline and appliquéd floral skirting, absolutely dreamy. She finished her look with sparkling statement earrings and her mother’s cathedral length veil, which served as her something old and added drama to her styling. Her bridesmaids were pretty in periwinkle, their crocheted lace cocktail dresses just perfect for a summer wedding, and each lady carried a bouquet of all white florals with pops of greenery. Scott and his groomsmen were dapper in classic black tuxes, a timeless look that Anna says was “perfectly suited for the grandeur of the beautiful church”.

The reception took place at the Indian Hills Country Club, a club Anna grew up going to. The dinner tables were set with white linens and cornflower blue napkins, a nod to Anna’s favorite color combination. Gold chargers gave a bit of sparkle and the floral design featured all white roses and orchids. Smaller arrangements were set in blue and white chinoiserie and plenty of lush greenery and candles completed the tablescapes. Personal touches were the theme of the day, from Scott’s favorite toasted ravioli and Anna’s favorite dry rose at the cocktail hour to the live band, Lost Wax, who played at the wedding where they first met. Anna hand lettered all of the signage herself, a theme which carried over to the “bride and groom” chair wreaths and their photo station sign which read “better together”. As the sun set over the golf course, Anna and Scott snuck outside to capture some romantic couple’s portraits before hitting the dance floor to party the night away with their friends and family. Congratulations Anna and Scott!

Share
Previous Gifts that Rock
Next Karli and Son: Modern Boho at the Yacht Club 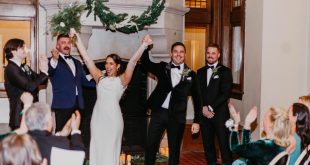