Jen and Matt met at work. When Matt got a promotion and had to fill his old position at a NYC ad agency. Jen came in to interview and got the job! It wasn’t long before she was promoted too and they were working on the same team. Matt says he was interested in Jen from the moment they met, but Jen wasn’t so sure. She was hesitant to date a coworker and Matt was her first friend in New York. She didn’t want to mess that up, but fate has a way of intervening. It took a year and a half, but eventually Jen agreed to go on a date with Matt. As she puts it, “the rest is history”!

Jen was radiant in her A-line gown with its open back and illusion neckline. She finished her look with sparkling sandals and a long veil for added drama. Matt was dashing in his electric blue suit and the wedding party wore a mix of vibrant colors. The ladies in long gowns and the guys with matching ties.

At the reception, tables were set with white linens and navy blue napkins. Richly colored floral centerpieces featured roses and peonies and gold votives completed the decor. After cocktails on the patio, guests moved inside for dinner and dancing. The ceiling over the dance floor was draped in sheer white fabric accented with twinkle lights, giving the space a romantic glow. Once Jen and Matt got the party started with their first dance, the floor was filled until guests saw the newlyweds off with sparklers in hand. Congratulations Jen and Matt! 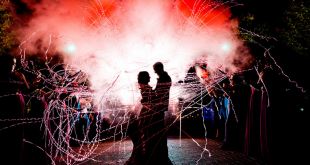 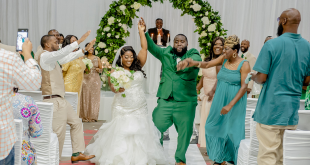 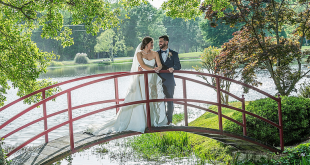 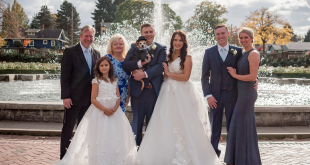