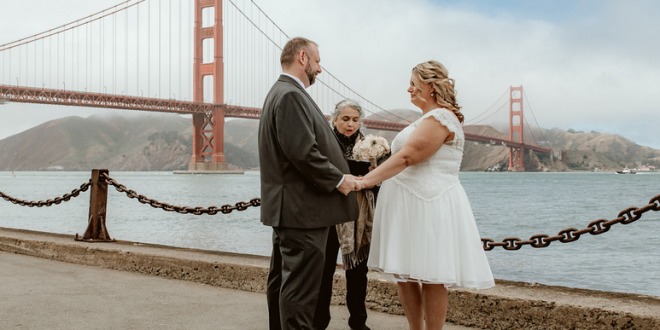 Couple Brought Together by Dogs Elope

“Justin and I met on Match.com. I messaged him because what first stood out to me was a picture of him playing with his boxer at the beach. Sadly, hours before our first date, his boxer passed away. Justin didn’t want to cancel our date, he knew I was a major dog lover and understood the immense amount of grief he was feeling and he needed a friend. After dinner we spent a long time looking at pictures and videos of his dog over hot chocolate. Just three months later, my heart dog, a black Labrador, also passed. I say our dogs brought us together. Fast forward nearly four years later and we have three rescue dogs- a little terrier mix that was thrown from a truck on a rural highway, senior golden retriever whose owner had passed of cancer, and a 2 year old golden retriever we just rescued from slaughter and brought from China last December.

Justin and I had both been married previously and had large weddings. We ultimately did not want undue stress and expenses for what we felt like tends to be a day that is planned for others rather than the couple getting married. Our love story was very personal to us and we wanted our ceremony to be, too.”