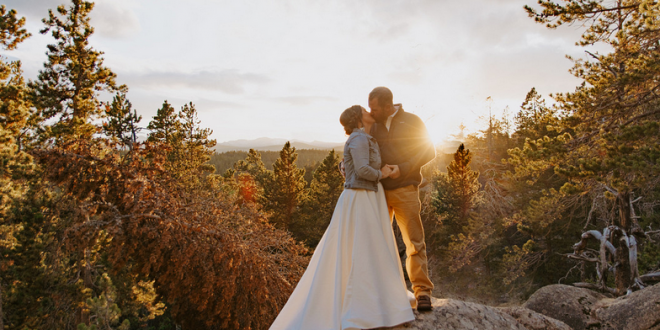 Becki & Travis are a couple that decided to get married during the pandemic after 10 years together. They are avid world travels as well mountain lovers who said ” I do” under their favorite mountains that they grew up on. This late September wedding turned out to be beautiful despite it snowing and raining earlier in the day.

We decided to do a first look between the bride and groom and then loaded up to drive up the mountain to their ceremony location.

To try to keep their ceremony small but also personal, they had a friend officiate their wedding along with two friends joining as witnesses. It was a tough decision for them to not have family and other friends but they decided that a simple, quiet ceremony was best and then a fun reception with everyone later would be best!

The brides ring has been in her family for many years, her father gave it to her and then a local jeweler worked with the family to size and style it to replicate her mothers.

After the ceremony, everyone signed their wedding license along with having a few friendly drinks! We then took off for some sunset photos and returned for a few more drinks and laughs with their friends before heading down the mountain.