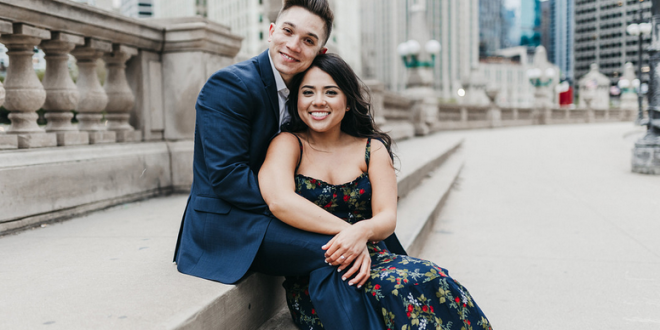 Jane and Justin met during their senior year at Arizona State University. It was during a Spring break trip that the two, specifically met. Greek life students often attend the same events, so when a couple of Alpha Chi Omega’s (Jane’s sorority) went to a beach-side event so did some Delta Kappa Epsilon’s (Justin’s fraternity) where they hit it off right away. Over the next few years, they started hanging out and became close friends.

Justin would say their first date was watching his Cubs play Jane’s Giants in the MLB playoffs. Jane would agree they just went as friends. It took a while but they finally both admitted they belonged together. They spent the next 2 years doing long distance before settling down in Chicago (also where they had their engagement session.)

After surviving a year of quarantine together Justin proposed over Thanksgiving during a trip to Jane’s hometown in San Jose, California.

Their wedding will take place at Venue at the Grove in Phoenix, Arizona in January 2022.