Jonathan and Carissa: A Fairytale Wedding

Once upon a time…. the clock struck 11:11 and they each made a wish. Everyone knows, you can’t tell what you wish for or it might not come true! Exactly two and half years after they first met Jonathan and Carissa celebrated a wish come true with a fairytale wedding. This wedding included everything you could hope for in a fairytale…. from a stunning bride in her beautiful wedding gown, a handsome groom looking dashing in his tux, a balcony kiss, a tiara and a carriage ride send off!

Carissa and Jonathan met at a young adult church group, and God has always been at the center of their relationship. They officially began dating. within a month of meeting each other. The minister of the group watched other couples come and go, but he could tell something was different with Jonathan and Carissa. They weren’t casually dating, they cared for each other and were developing a deep relationship.

Last October Jonathan decorated a covered bridge, with lights and pictures of them together. At the end of the bridge he knelt in a circle of roses and asked Carissa to marry him. Of course she said yes!

I am completely in awe of Carissa’s planning and organization! While a doctoral physical therapy student, in the middle of a pandemic, she planned an amazing wedding! Her attention to detail, left nothing unaccounted for, and she included personal touches in her planning! In his speech, Carissa’s brother Jordan, talked about how she is know for her intensity and drive. He pointed out while Carissa has those traits, it’s because “she cares so much.” That was easy to see, in the letters she and Jonathan wrote to their parents, and each other on their wedding day. They also gave their parents very thoughtful gifts that touched their parents deeply. All the feels and tears!

Carissa looked like a princess in her beautiful wedding gown and tiara! Jonathan was definitely moved to tears when he saw he walking down the aisle! This year has been a tough year for everyone, Jonathan and Carissa included. The year and all its brought, prompted them to incorporated a time of worship into their ceremony, to praise God. It was such a special time to give praise to God and worship together during a wedding!

After a fun-filled reception celebrating with their family and friends, Jonathan helped Carissa into the carriage waiting for them. It was the perfect send off for a fairytale wedding day! 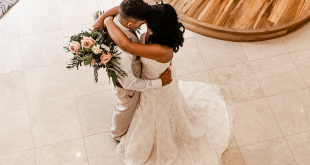 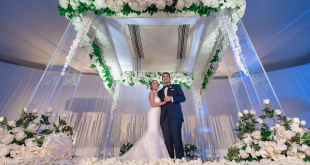